Eight days! The countdown officially began several months ago, and almost every morning some member of the family would mention during breakfast, “38 days left!”, “25 days left!”, “17 days left!” etc. etc. Anticipation is building and Caleb is trying to pick what suit he is going to wear. Several (young) members of the family are counting their money in their “piggy banks” and dreaming about new CDs.
Oh, have I explained what it is exactly that we are looking forward to? Perhaps this picture will give some insight… 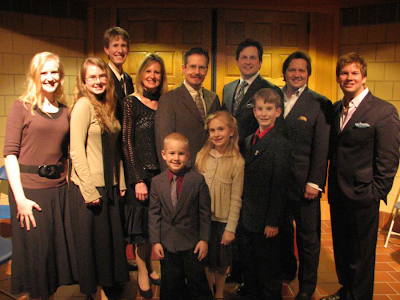 If you follow Southern Gospel Music at all, then you should be able to recognize those three guys (the ones who are obviously not part of our family) as the popular, amazing, and talented Booth Brothers! Yes, our favorite trio, the Booth Brothers are coming to Maplewood, MN on April 2nd, and we will be there…hopefully in the front row again.

Michael Booth, Ronnie Booth, and Jim Brady have won our respect through their smooth blend, uplifting songs, and strong message. They are the most ministry-minded people we have met in the SGM industry, and we appreciate them and their music very much.
And for those who ask us every year at the annual Booth Brothers concert: “No, we are not related to the Booth Brothers.” It never fails; for the past two concerts we attended of theirs, we’ve been asked by many different people, “Are you related to the Booth Brothers?” In fact, even when we really didn’t know who the Booth Bros. were, a well-known bass singer came up to Dad at a quartet convention and said, “Do you know you look like Michael Booth? I’m friends with him, and you look like him!” We were all rather confused, not really seeing the correlation between Dad and Michael. On Father’s Day that year, though, I took a picture of Dad without a mustache and put a mustache on Michael Booth, and then we saw the slight resemblance! 🙂 Otherwise, NO, we are not the Booth Bros. family!
If you are interested in the Booth Brothers and attending the concert, click here to go to their website and click here for more info about the concert; we’d love to see you there!
Blessings and Joy in the Journey!
T for TGF